We review XPPen's Artist 24 Pro - XP-Pen's top of the range 24inch pen display, with a QuadHD resolution, battery-free pen, and tilting stand, the XPPen Artist 24 Pro has it all, and it's got an extremely competitive price point too! Find out how it performs in our review. 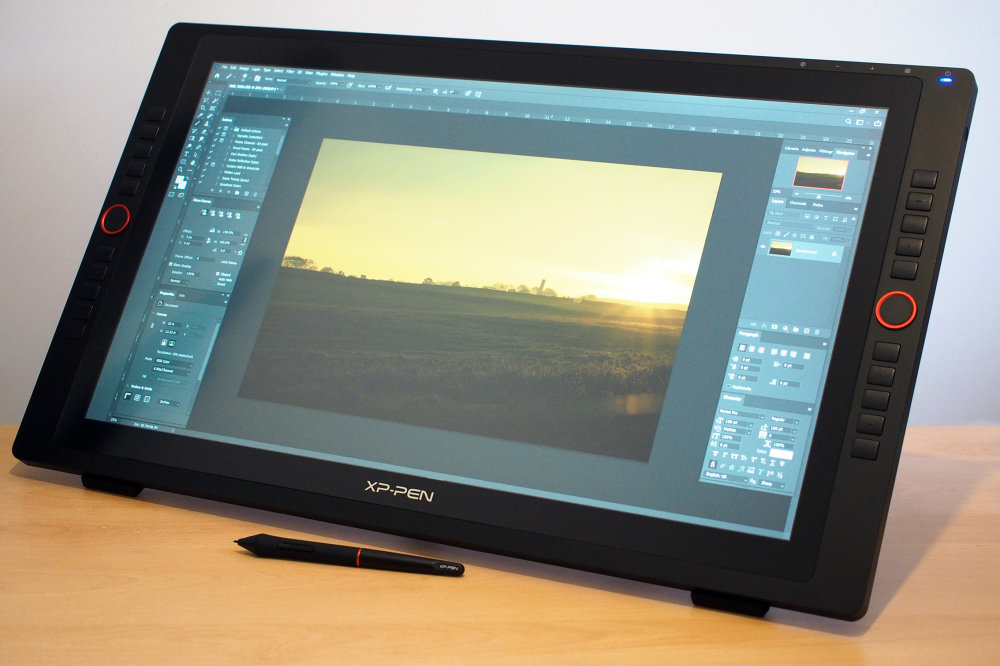 The graphics tablet is a device that lets you use a "pen" in order to draw and edit photos on your computer. The graphics tablet comes in a variety of sizes, but the next level up is a monitor with a built-in graphics tablet, and that's where the XPPen Artist 24 Pro comes in, it offers a 23.8-inch QHD (2560x1440 resolution) screen, with tilting stand, letting you draw directly on to the screen. The XPPen-Artist 24 Pro is available for around £899, which makes it very competitively priced compared to some of the alternatives available.

If you've previously looked at pen displays (also called drawing tablet), then you've probably lusted after them, but been put off by the price. With the XPPen Artist 24 Pro, you have a large pen display with a great resolution, and an affordable price tag, making this a much more realistic option for people who edit photos or draw a lot. Whilst a graphic artist who draws 6+ hours a day is likely to get the most out of a display like this, similarly, someone who spends several hours a day touching up and editing photos could also benefit from a monitor like this.

The XPPen Artist 24 Pro features a 23.8inch screen with 2560x1440 QHD resolution. Colour reproduction is an important feature for a monitor, particularly if you're editing photos or creative graphics, and the XP-Pen offers up to 90% AdobeRGB.

The Pen supports up to 60 degrees of tilting, letting you hold the pen how you want to when using it, and the pen doesn't use a battery, so there is no need to worry about charging or replacing a battery.

The screen tilts from 16 degrees to 90 degrees, letting you have an almost flat surface to draw on, as well as reproducing the tilt you'd get with a traditional draftsman/drawing table.

All Artist Pro displays (excluding Artist 16 Pro) come with a free creative software package, and you can choose from ArtRage 5, openCanvas, or Cartoon Animator 4 Pipeline Version.

There's a USB-C connection, so if you have an iMac, MacBook Pro or modern laptop with a USB-C connection, you can use this for the display output. You can also use the provided USB to USB-C cable to connect the monitor to a normal USB socket, on an older computer, and the monitor has a built-in USB hub so you can connect additional devices to the screen if needed.

In the box you get everything you need to get up and running, this includes: 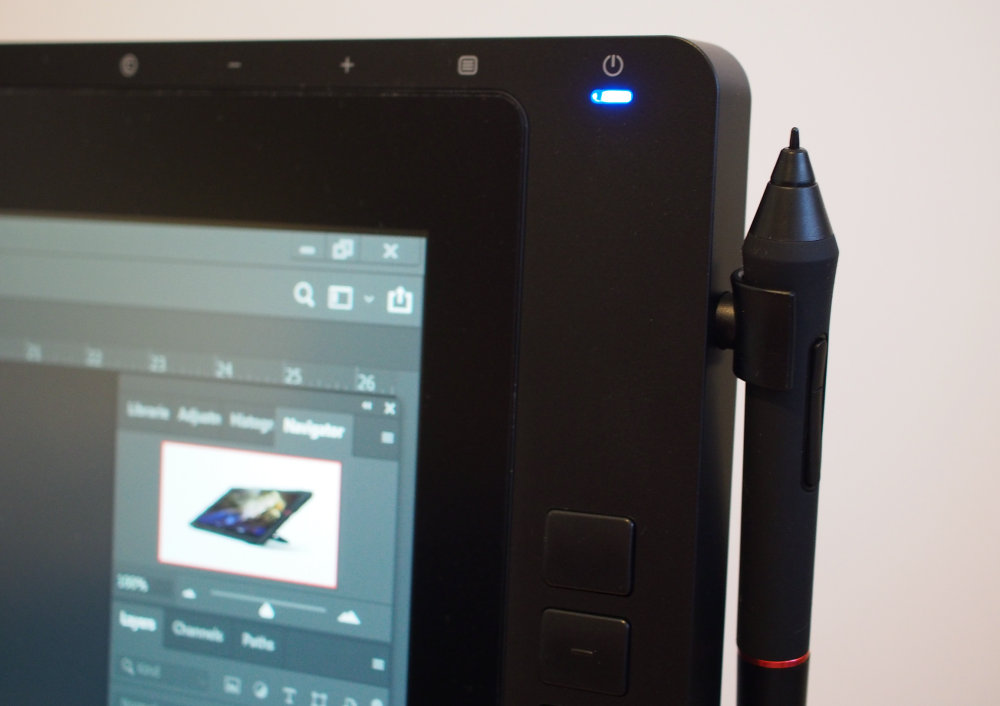 XPPen Pen Mount On Side Of Monitor

Installation. Ensure any drivers from other graphics tablets is uninstalled (such as Wacom). Download the drivers from XP-Pen's website and install.

Connect the USB to USB-C cable, as well as the HDMI cable to your computer, and you'll be up and running in no time. The monitor is provided with an AC adapter, which is needed to power the monitor.

You can use the two USB ports on the back for your own USB devices.

This diagram shows some of the angles possible with the monitor, however, there are in fact 10 different angles available.

The stand is built into the monitor, and at the back, there is a lever/latch that you pull towards the screen in order to adjust the tilt angle for the stand. The stand is extremely solid, being made from metal.

The monitor has rubber feet at the bottom of the monitor, at the front, with enough grip to keep the monitor in place regardless of the tilt angle. There are also rubber feet (wheels) at the back of the stand, so that this works at different angles as well. The screen goes from almost 90 degrees (in upright position), down to 16 degrees (laying down), and each position is solid and secure.

The monitor feels very well-built, with the stand and weight of the monitor giving it a premium feel. The monitor weighs roughly 6.9KG, and the plastics used feel much more solid than a generic monitor, with no flex or creaks, when pressing or squeezing the monitor. 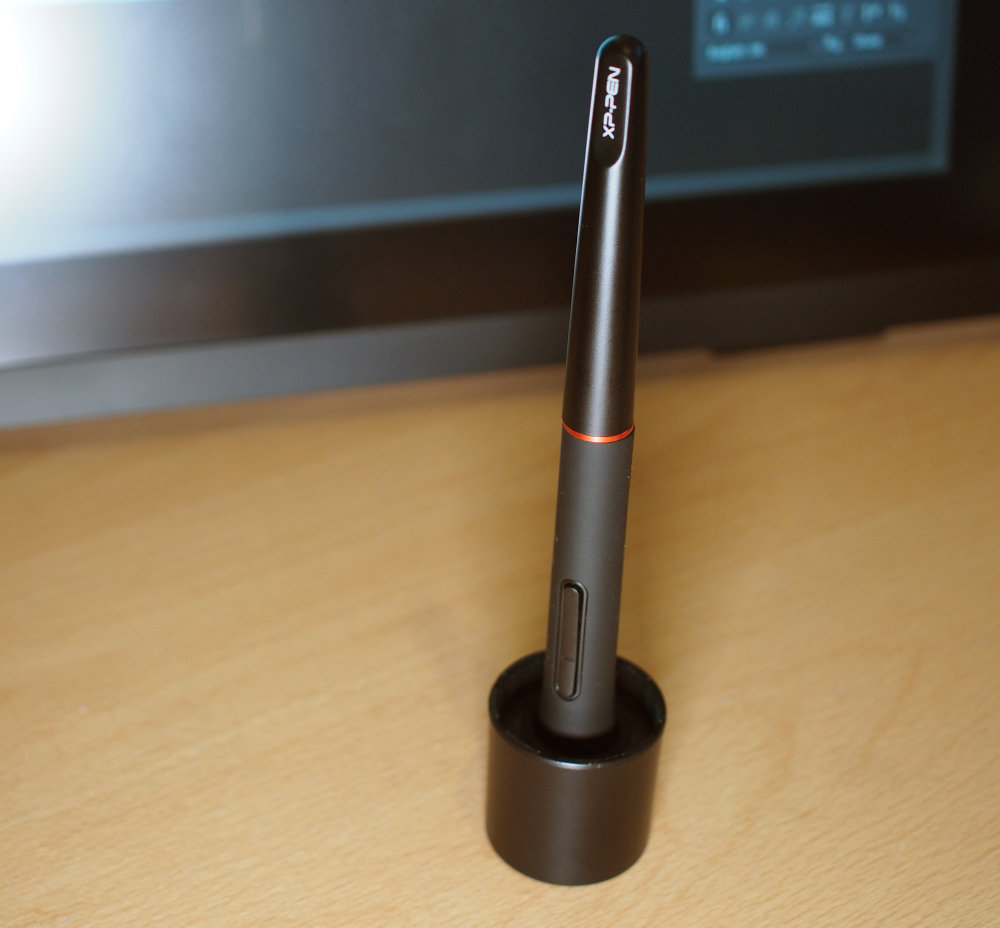 The PA2 battery-free stylus pen works extremely well, and once you get into the flow of drawing on the screen, you can become quicker at drawing, with the feeling being very natural, feeling similar to drawing with a real pen on paper.

With 8192 levels of pressure sensitivity, the pen is very responsive to the amount of force you use when drawing. When you press harder when drawing, you get a thicker pen/brush, and lighter gives you a thinner line. If you press quite hard on the pen and screen, then there is minimal flex, and the display remains consistent.

You can use the pen with a tilt of up to 60 degrees, and this can be helpful as you move the pen around the screen, and means you can comfortably hold the pen at an angle that works for you. The design of the pen, with a rubber grip that is thicker towards the end, makes it comfortable and easy to hold. There are two buttons on the pen, which can be customised.

The pen appears to be very accurate, with little difference between where you place the pen, and where the drawing or lines show up on the screen.

There's also a small two finger glove to help keep the screen clean when you're leaning on the screen when drawing. 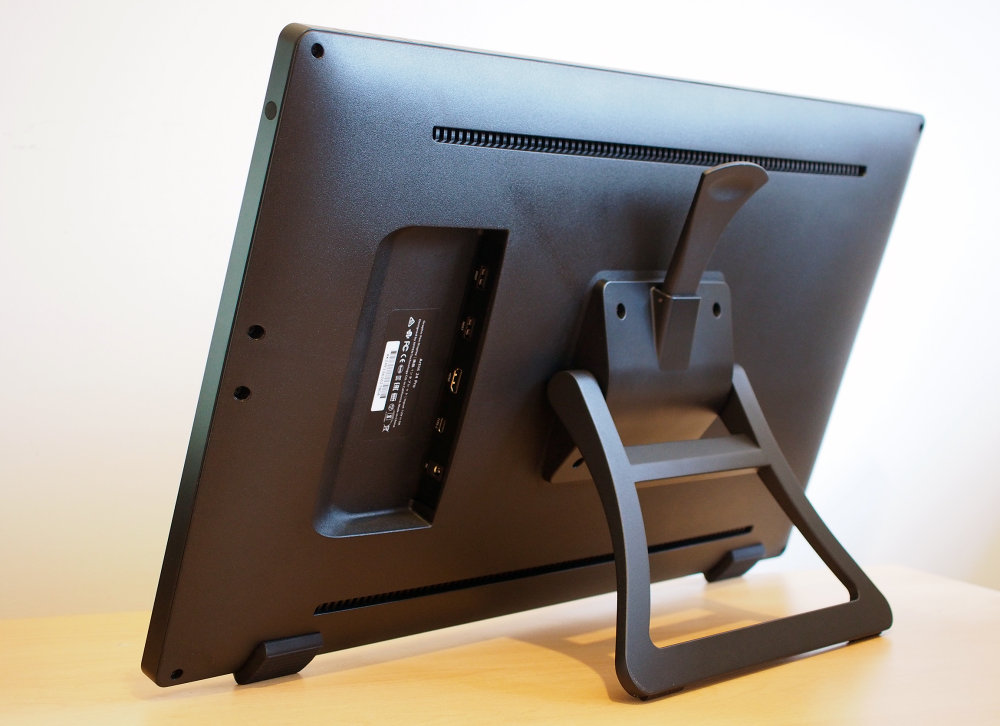 In use, it is easy to adjust the angle of the monitor, making it easy to switch between using it as a standard monitor and a drawing tablet.

If you've got limited desk space, and plan on using another screen on the desk as well, then it's worth noting that the 23.8inch screen is more like a 27-28inch monitor in real estate taken up due to the large borders and buttons around the screen. When the screen is tilted back for drawing, then it also takes up more desk space than in the vertical position, so you will need to keep your desk area tidy.

The customisable buttons are quick and easy to use and, on default settings, work well straight out of the box, with the left scroll wheel used for zoom (in Photoshop), and the right scroll wheel setup to rotate the image (in Photoshop), so that you can more easily draw on it, just like you would if you were drawing on paper and needed to move the paper to get better angles. You can easily toggle between the functions provided by the scroll wheel with one of the buttons.

There are raised dots and lines on some of the buttons to help you quickly find the button you need without always having to look, as you can simply feel the button(s).

XPPen Software Controls: The software lets you setup the screen, setup the pen, as well as customise the buttons and scroll wheel(s) on the side of the monitor. We used a Windows 10 PC, and used the beta software, which is shown below.

The screen - The screen has an anti-glare coating and comes with a protective film for transportation and delivery, which should be removed before use. 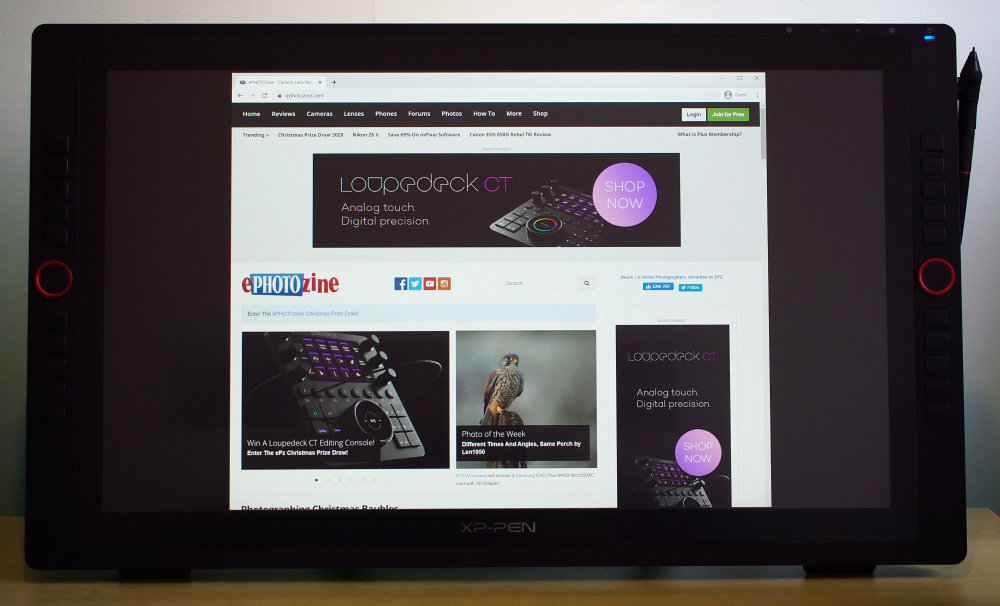 When you look at the screen with nothing shown, for example, when looking at a blank screen, it's noticeable that you can view reflections in the screen, however, these quickly go away when you put something bright on the screen. This is most likely due to the technology needed in order to make this a pen display, as there needs to be a layer over the screen, that you don't need with a standard monitor.

The screen gives up to 90% AdobeRGB, which is very good but not quite up to the standard of an EIZO or NEC photographic monitor. The monitor is also said to achieve 100% sRGB. Thanks to this, and the quality of the display, colour reproduction is very good, and contrast is also good.

The screen has a brightness of 250cd/m2, which is good for a pen display but does not match the brightness levels of some monitors, with photography-focused screens offering up to 300/350 or more. Straight out of the box, the brightness level needed adjusting as it was a little low for our tastes, but once adjusted the screen looks great, with excellent colour reproduction.

Using the XPPen Artist 24 Pro gives you the confidence to quickly and precisely edit your photos and images. The shortcuts make it easy to move around the image quickly, and they are cleverly set up straight out of the box so you can get going quickly and easily. You can also customise the buttons and controls for your own needs to make it even better, and the scroll wheels are a great feature to have included.

The screen looks great, with great colours and a very good resolution. It's impressive how much you get for the price, and the XPPen Artist 24 Pro offers excellent value for money, with everything you need to get started. The ability to draw directly on to the screen makes editing photos and graphics a lot of fun, and if you've got a creative streak, then this would be a great choice. 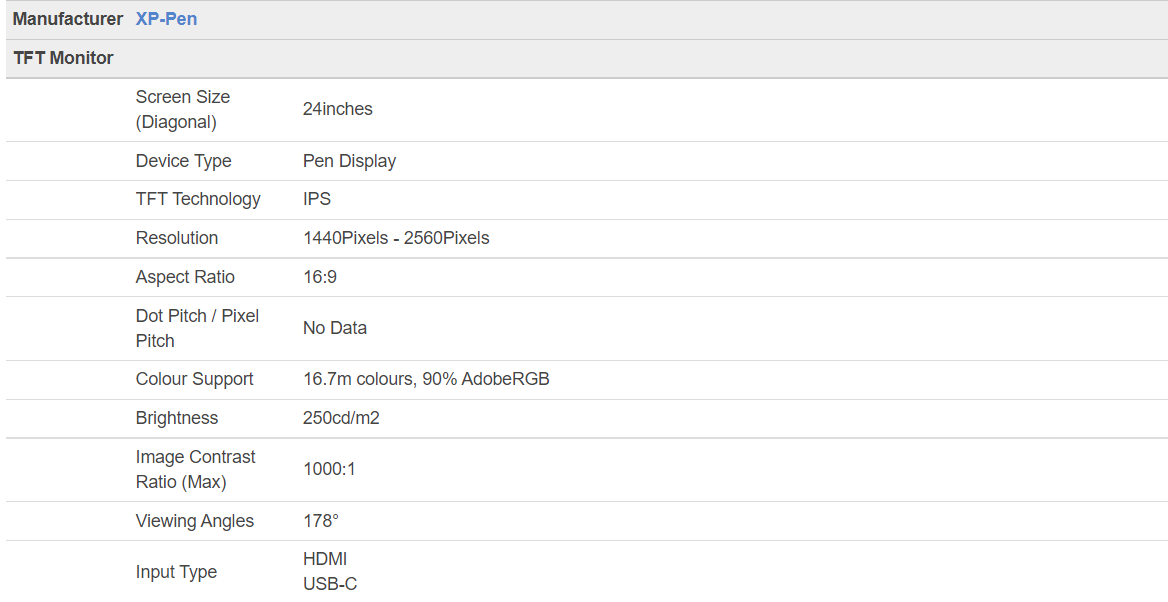 You can view full product details at official XPPen store.